We lead the industry with the three pillars of unprecedented safety, long life and temperature characteristics

1.Our Development Policy is to Prioritize Safety above All Else

The HY battEliiy is a large lithium-ion battery developed and manufactured in Japan by ELIIY Power Co., Ltd. that delivers world-class safety and performance.

The HY battEliiy L series achieves world-class safety that produces no fire or smoke and has no risk of thermal runaway even if punctured with a nail, crushed or overcharged.
■ Use of Lithium Iron Phosphate (LFP) as a Cathode Material 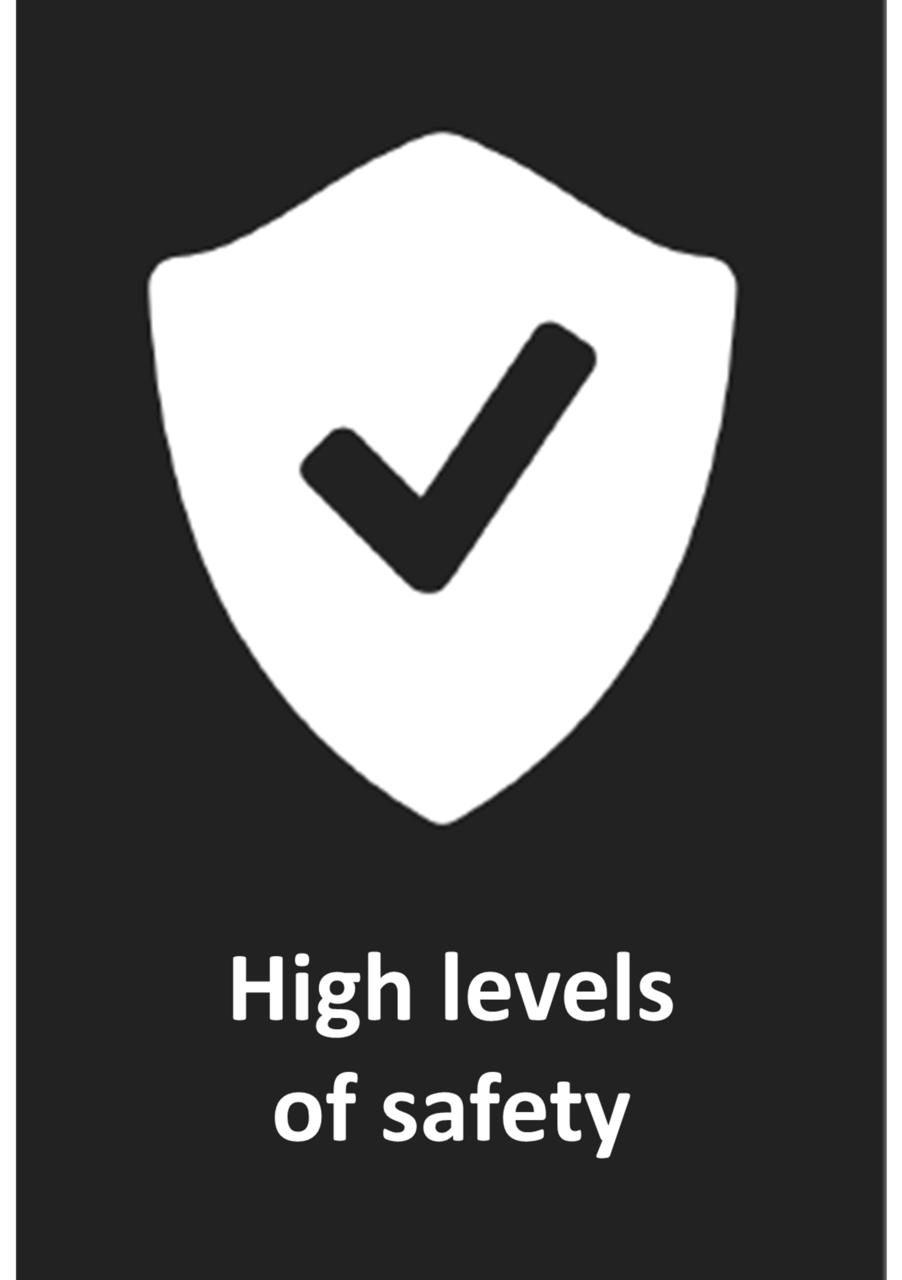 Lithium iron phosphate is a cathode material that features high thermal stability, has properties that make it less susceptible to thermal runaway, and boasts excellent safety with minimal risk of catching fire. However, simply using LFP as the cathode material does not mean that a battery is safe. By optimizing the battery overall, we achieve a level of safety ensuring that it will not produce smoke or catch fire even if punctured with a nail, crushed or overcharged.
ELIIY Power continues to evolve in pursuit of safety towards realizing an unburnable battery. We will continue with R&D efforts going forward with the aim of developing batteries that combine safety with long life of up to thirty years.
■ Ensuring Safety from the Smallest Individual Battery Cells
In general, battery management units (BMUs) are used to monitor and control lithium-ion battery voltage and temperature and ensure safety. But as a BMU itself could possibly fail, ELIIY Power ensures safety at the individual battery cell level. 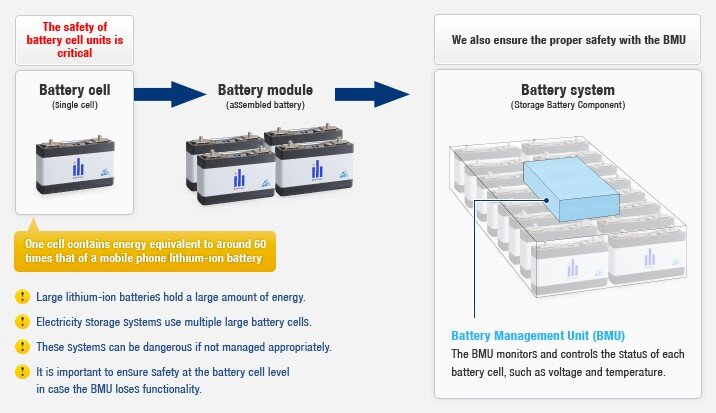 ■ The Only Battery To Receive Safety Certification from TÜV, the World's Most Stringent Safety Standard
Our large lithium-ion battery was the first in the world*1 to pass the product safety inspection of the international testing body TÜV Rheinland.
*1 Safety standard certificate (manual for testing lithium-ion cells under harsh conditions v.2:2011)

Harsh safety testing modeled after disasters such as earthquakes and fire and other unexpected accidents was conducted, demonstrating that our battery produces no fire or smoke across 11 test items.

Usually, the capacity a storage battery is able to store declines with repeated charge and discharge cycles. Due to its optimized battery materials and structure, the HY battEliiy L series achieves longer life, retaining 70%*2 of battery capacity even when fully charged and discharged over 15 years (approximately 17,000 cycles). The capacity of ELIIY Power's storage batteries takes longer to decline even after extended usage, achieving quality levels that stand up to usage on the scale of decades, not years.

*2  Battery cell model: PD50S06
This is the estimated value for the percentage of rated capacity (capacity retention) in the capacity of a single battery cell when fully charged and discharged for three cycles per day (depth of discharge [DOD] of 100%) at room temperature of 25ºC and discharge current of 48.5A (1C). The degree of decline in capacity retention varies depending on the usage conditions of the battery storage system in which a battery cell is installed (frequency of charge and discharge, etc.), the usage environment, and other factors. In addition, the capacity of the installed storage batteries and the capacity that can actually be used as an electricity storage system varies depending on effects such as the usage conditions of the electricity storage system. 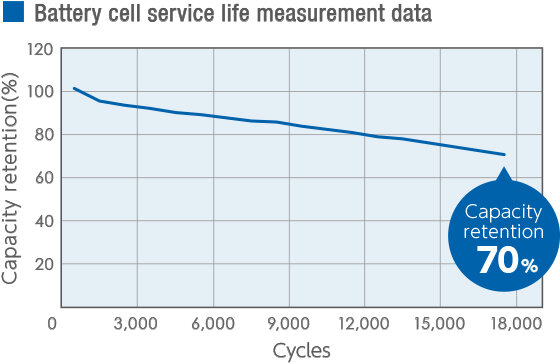 Many people may have experienced a digital camera failing to turn on in the middle of winter. Extreme cold and heat are formidable enemies of batteries, but the HY battEliiy L series can operate under a wide range of temperatures from -20ºC to 60ºC*3.
*3  This temperature range differs from the guaranteed operating temperature range of the electricity storage system.

Electricity storage systems can also be installed outdoors in extremely cold regions*4, enabling the effective use of limited indoor space. Even in outdoor locations exposed to direct sunlight or power supply rooms that experience high temperatures due to radiant heat, our batteries can be used without the need for air conditioning or cooling equipment*4, enabling total operating costs to be reduced.
*4  Installation conditions vary depending on the installation environment and other factors. 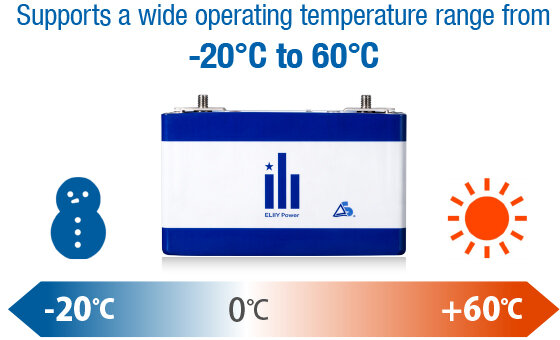 Electricity storage systems equipped with ELIIY Power batteries are used by many companies including Daiwa House, Secom and NTT Docomo due to there high levels of safety and performance.
Learn more about our track record here. 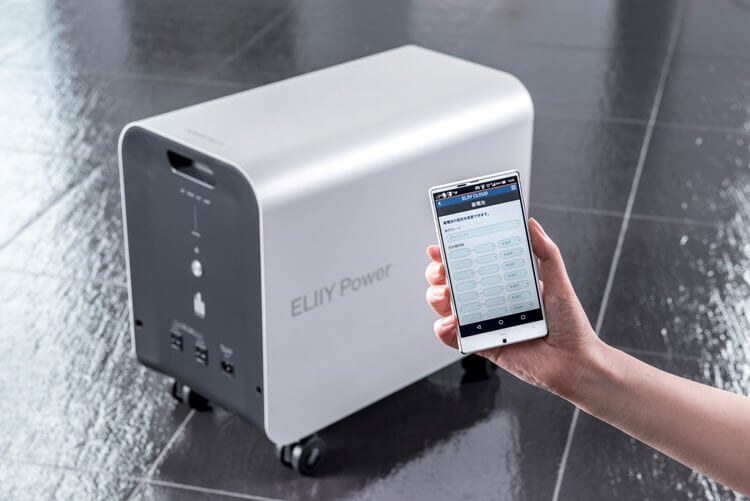